Escapade in Brittany: places of visit

Saint-Malo – City of the corsairs 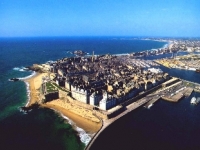 City of Corsairs, capital of the seas, jewel of the Emerald Coast, whatever the adjectives attributed to him, Saint Malo has always been, throughout its history, the rendezvous of all the adventures and all dreams!

The city holds a special place in Brittany. Located at the northern tip of the Ile et Vilaine, on the edge of Normandy and not far from Mont Saint Michel, Saint Malo is also a springboard to the Channel Islands and England.

A CITY FOUNDED IN THE XII CENTURY

St. Malo is named after the Welsh monk Mac Low, which, to the sixth century, became bishop of Alet, ancient cradle of the modern city founded in the mid-twelfth century on a rocky island neighbor. From the thirteenth century, Saint-Malo did catch on enemy ships. In 1308, they had a common juror, and then from 1395 to 1415, they give the King of France, Charles VI, who granted them franchises port. In the late fifteenth century, Anne of Brittany, by his successive marriages with Charles VIII and Louis XII, annexed the Duchy of Brittany to the Kingdom of France.

To better keep the port franchises, the Dukes of Brittany have built the castle that besiege St. Malo in 1590 to declare then “Independent Republic” for 4 years until the abjuration of King Henry IV.

Already, from 1534 to 1542 Jacques Cartier had doubled the road of Newfoundland and discovered Canada.

The city once known as “Saint-Malo de l’Isle” narrow in its narrow precincts (16 hectares) around its cathedral, partially burned during a fire in 1661.

In the following years, Vauban and Garangeau again transformed it by increasing it with 4 recoveries up to 24 hectares. Thanks to its navigators and its merchants who arm for the Indies, China, Africa, Americas; the prosperity of the city is extraordinary in seventeenth and eighteenth centuries.

THE CITY OF THE EXPLORERS 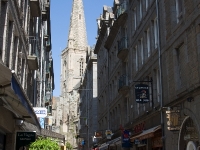 Gouin de Beauchesne faces Cape Horn in 1701, Mahé of Bourdonnais colonizes Mascareignes and takes again Madras, Maupertuis leaves for Lapland in 1736 to measure the shape of the Earth. Its corsairs, Duguay-Trouin which seizes Rio de Janeiro in 1711 and Surcouf give him a considerable prestige.

After the end of the “War of Race” in 1815, Saint-Malo will still maintain its armaments for Newfoundland and will continue the installation of its port.

THE HERITAGE OF ITS GREAT MEN

The richness of the traders is not expressed better than in the construction industries than they left. If the houses with wood sides with painted stained glasses resembling the back ones of ships have almost all disappeared (the House of the Poets and the Writers), old stone constructions are still enough numerous to testify to the fact that was the richness of Saint-Malo (the Hotel of Asfeld).

SAINT-MALO IN THE TWENTIETH CENTURY 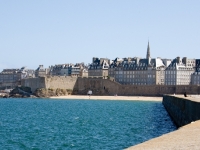 The combat of 1944 devastate the port and destroy Intra Muros to 80%. If the rebuilding restored its legendary silhouette to him, Saint-Malo, city historical and of maritime record, is equipped since equipment essential to the one with the highest places with tourism with Brittany and to the first port with its northern coast.

On 26 October 1967, Saint-Malo intra-muros, St. Servan, and Parame Rothéneuf merge: it is the birth of the Grand Saint-Malo and a new beginning for the city.

The City Corsair cultivates his nautical image and that is worth to him to lay out of the quality control mark “Nautical France Station”. It is thus in all logic that Saint-Malo is the theatre many great events, the such Road of Rum or the Transatlantic race Quebec/Saint-Malo, every four years.