Dinard: Superb resort with beautiful beaches, promenades along the sea, sumptuous villas, gardens, where a flourishing Mediterranean vegetation, Dinard “the elegant” has preserved for you the particular charm of stations the Belle Epoque. 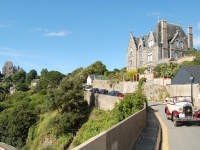 In front of Saint Malo, this former fishing village, became fashionable seaside resort since 1850, has preserved its architectural heritage of the nineteenth century by classifying 407 villas.

In the early 19th century, Dinard is a small fishing village close to the neighboring town of St. Enogat. Dinard took his aspect of Seaside resort in the mid 19th century with the arrival of the first English families and “supporters” of the sea bathing the 1870s, real estate development of the resort is at its peak with the Action of Count Rochaïd Dahdah to be the real promoter of the station.

Villas, hotels, casinos and tourist facilities are increasing and rapidly changing aspect of the City. By 1889, Dinard had become the meeting place of high society nationally and internationally. It was then regarded as the “first seaside resort of France” and hosted the Society of Aristocratic Era, the great families of the nobility, and the personalities of the European Royal Families, the world of industry, commerce, the political, Literature and the Arts.

In its heyday, Dinard today retains a unique heritage resort consists of these beautiful villas that line the coast. Eclectic style, these villas and majestic fancy multiply architectural references. They are now protected by a Heritage Protection Area Architectural, Urban and landscape. 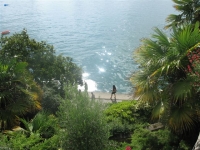 City of art and history, the Promenade du Clair de Lune will allow you to stroll among the palms and Mediterranean scents and discover seaside architecture. And then, you will follow step by step the artists, writers and intellectuals who have left their mark in Dinard. From writer Judith Gautier to the painter Pablo Picasso, you’ll discover that the city has long been a meeting place of the French intelligence and global.