One day tour in Brittany and Normandy

8H00 : Your private English speaking tour guide will welcome you at the reception desk of your hotel in Nantes ( Rennes ) and will drive you in a luxury car (for 4 persons), a top of the range minibus (for 6 persons) or a coach (for 20 persons and more) to discover the jewels of Brittany and Normandy.

As large as the Tuileries Gardens in Paris, the citadel is surrounded by ramparts of 1754 meters long.
Unlike in the city 80% destroyed, the walls have not suffered bombing allies in 1944.

Between 1708 and 1742, Simeon Garangeau engineer, architect of the king, led the expansion program of fortifications designed by Vauban. The area of ​​the city extended over 24 hectares. The specificity of the ramparts of Saint-Malo is that they are placed on the rock which supports the city and the ramparts are held  by the weight of stacked stones.

From the Porte Saint-Vincent, the main entrance to the city intramural to Porte Saint-Thomas, the walls measure 1754 meters. The ramparts of Saint-Malo are classified Historic Monument since 1921. 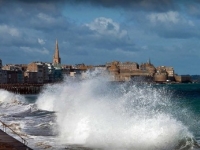 *For a departure from Rennes :  : Visit of a gorgeous shipowner’s house ” La Ville Bague ” which was built in 1710 by Garangeau, an architect of Vauban.

12h00 : Facing the bay of Saint-Malo, on the Sillon beach, you will have lunch in a dreamy pleace offering a gourmet cuisine. 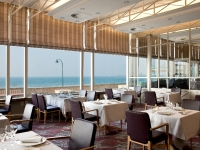 14h30 : Visit of the Mont Saint Michel the « Wonder of the Western World » which forms a tower in the heart of an immense bay invaded by the highest tides in Europe.

With Rome and Saint Jacques de Compostelle, this great spiritual and intellectual centre, was one of the most important places of pilgrimage for the Medieval occident. The Abbey was turned into a prison during the days of the French Revolution and Empire, and needed to be restored before the end of the 19th century. With the celebration of the monastic’s 1000th anniversary, in the year 1966 a religious community moved back to what used to be the abbatial dwellings, perpuating prayer and welcome the original vocation of this place. Friars and sisters from “Les Fraternités Monastiques de Jerusalem” have been ensuring a spiritual presence since the year 2001 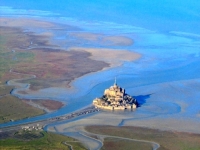